FOR ANA AGUDO (ALIÁN) MORE THAN A PAINTER

I wasn´t lucky enough to meet her but I did have the chance of enjoying her painting in an exhibition of her art at The Artistic Center in Granada.

As I entered the exhibition I was mentally transported to Dresden. It was as though I was in front of a display of the artistic community DIE BRÜCKE (El Puente). As I observed and analyzed each one of the works that constituted the show the more I saw, the more I imagined Alián among those four components of the German expressionism group that one day decided to get together and create an utopic world, pretending to overcome the simple perception of reality to arrive at the psychological aspect of impression.

In 1906 Kirchner, in a declaration made as a manifest that the group came up with, say: “All who express directly and without falseness that which moves them to create belong to our group” I´m sure that Ana Agudo could have belonged to that community should she had lived at that time. What´s more, it would have been the members of the named group who, after knowing her work, would have asked her to join their circle.

And it is that Alián, expressing her feelings in the way she does, tried to change the world, having an active part, a part of fight. Her aesthetic comes from her ethics, of a need for action and of a response before a determined social situation.

I observe her works such as “Three at night” {Tres en la noche}; “Picture of an escape”{Retrato de la huída}; “Abysm, I & III” {Abismo I & III}; “The scream” {El grito}; “Hunger” {El hambre}, and I see how the intensity of contents overpass formal perfectionism, basing her expressivity in a primitive setting that is empathized by its fauvist color.

The art of Alián is an art of opposition. Opposition to a society that is egotistic, materialistic and vulgar, that inhibits itself before problems as enormous and desolate as hunger, drug addiction and the wars that devastate humanity. When she transfers her feelings to the stand she doesn´t “photograph”, she “visions”. As Pablo Jimenez would say, “in her artistic work, she doesn´t look, she sees; she doesn´t tell, she lives, she doesn´t find, she seeks.” The concatenation of the facts, illnesses, drugs, screams, wars, hungers.., is substituted by her transfiguration, motivated by all that she handles, and also by that which exists behind things, obtaining tragic effects of an incandescent nature and of an overpowering intensity.

If I had to express my preference for any of Alian´s works it would be for The Scream, ( El Grito). In it Ana seems to choose crucial moments of the human being (Just like Munch or Max Beckham did before her) giving her pain and desperation her most pathetic gesture. We could recall, observing this painting, that passage from philosopher Sören Kierkegaard, whose spiritual affinity with Ana is clearly seen: “My soul´s weight is so great that no thought can carry it and there are no wings capable of elevating it to the immaterial. If it moves it seems to caress the ground with its wings, like the low flight of birds when they forebode a storm, in my chest dwells an oppression, a fear that foretells an earthquake”.

She, who at times wished to fly so high, seemed to lower herself to ground level before the weight of so much violence and terror, so much enmity and so much anguish, breaking the silence with her hopeless and heart rending scream. Thank you, Ana, for the precious legate of your work

ALIAN, A VOYAGE OF THE SPIRIT

The first time that I met Ana was at the Cultural Center where she worked. I showed her my work to be programed in the exhibitions of the Center.

A simple and welcoming smile and an intense look dazzled me from the very first moment: it was as though we had known each other all our lives, feelings that are felt with few persons. Feelings that were confirmed and amplified as time went by, revealing all her beauty and interior potential. If in our life the encounter with a special person is something great, important because her characteristics are unique, in Ana I found a great person, a great artist and above all, a great friend. Art and life cohabited in her, they weren´t two separate worlds, they were a sincere compromise, precise, without superfluous and elitists intellectualisms. She lived in society actively, fighting against every kind of obstacle, to defend everything that wouldn´t allow the free circulation of ideas and creativity. Her first paintings in her juvenile stage are witnesses of how much in love Ana was with people, shared her restlessness, her anguish and her happiness. The expressionist brush strokes don´t want to be limited only to a social denouncement and express with the gesture the vitality, the rebellious strength, the will to change it; there is also spirit, the essence of the humane. Her painting, with the experiences of life and her interiority are enriched with spirituality and strength. The expressionist technique with its chromatic strength, its signs, its materic unquiet, allows her to express life commenting it from inside, using the grotesque caricature or deformity of form to represent what the very experience of life influences our spirit.

The mature work of Alián, now in her “intermediate stage”, has something more than mere existential vibrations: there is spirituality, poetry, joy of living, in spite of everything. This is the most important message that Alián transmits to us with her work: strength and energy to survive, to try to improve society starting with ourselves, acting without egoism, from inside to outside, without forgetting the beauty of the human being, of its great interior potential, of its poetry.

All these concepts also cohabit and are evident in the mature work of her last years. From expressionism remains the strength of color and the gesture, but what is really significant are the applications of the Delaunay theories, orphism, simultaneity and geometric constructivism. In the theories of Delauney color is form and contents at the same time, by effect of simultaneous contrast obtains dynamism and independence.

Something extraordinary occurs in this last work, of big format, that is not limited to just one optic dynamism, to one orphism where thoughts of color, light, music and poetry are related, because they are an invitation to travel through forms, colors and spaces, as though the onlooker could, with the spirit and not with the eyes, enter the painting and live it, like its author lived it. A trip of the spirit through multidimensionality, going over the great areas of the canvass in all directions, as a virtual reality.

I have been lucky to know Ana at a very intense and special time. I take this chance to invite all of those who have not have the luck of meeting her, to admire her work, thus being witnesses of the extraordinary beauty, and through her paintings share her vitality and her energy, which will always be with us, because Ana is the best expression of the human being, is pure life

THE COLOR OF INOCENCE

It is said of the great clowns that deep down in their souls, sadness reigns. It is said of the great artists that their work creates a fantasy world where to take refuge from the pain that the real world causes them. Perhaps that is the reason why we, the rest of mankind feel attracted by their art: to be transported to a world where truth is purer, where the soul of the artist and our own are melted (united) in the loving act of “feeling together”

In Ana´s eyes never escaped the stab of the human pain which we see in her painting, but her exceptional generosity transformed it into a scream of hope

The works of Ana disarm us with her innocence, inviting us sweetly to become “better beings.” Nothing more, and nothing less.

Those of us who were lucky to know her and inevitably, love her, feel the joy of her generosity. Joy and generosity without respite, without measure.

She is gone now and left us the perfume of her colors, the echo of her “revolutionary joy”.

Ana came into this world to make love to us. 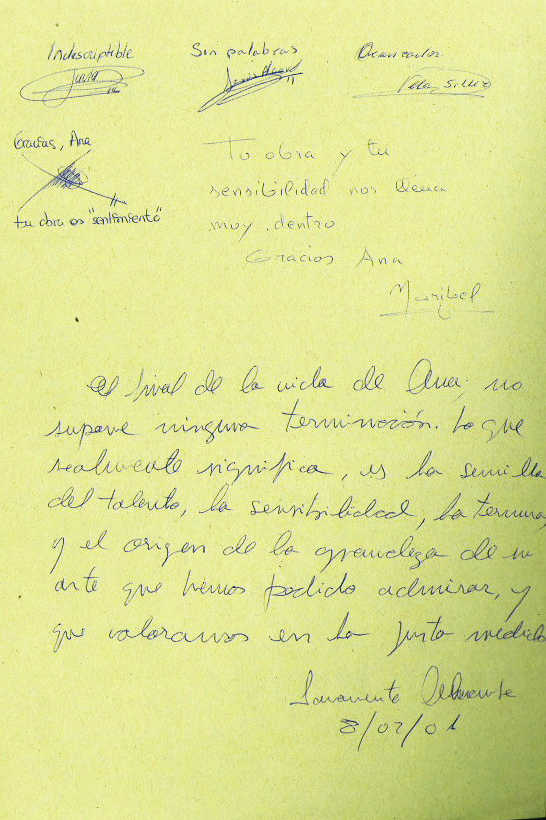 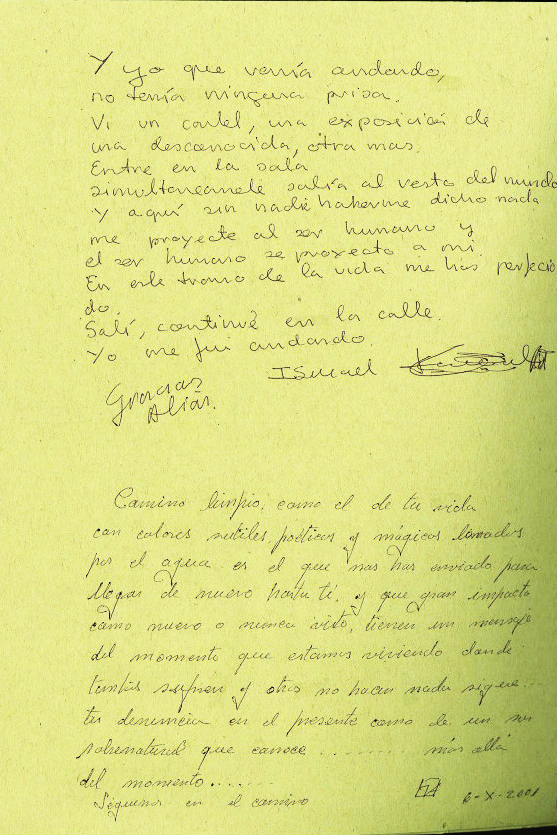 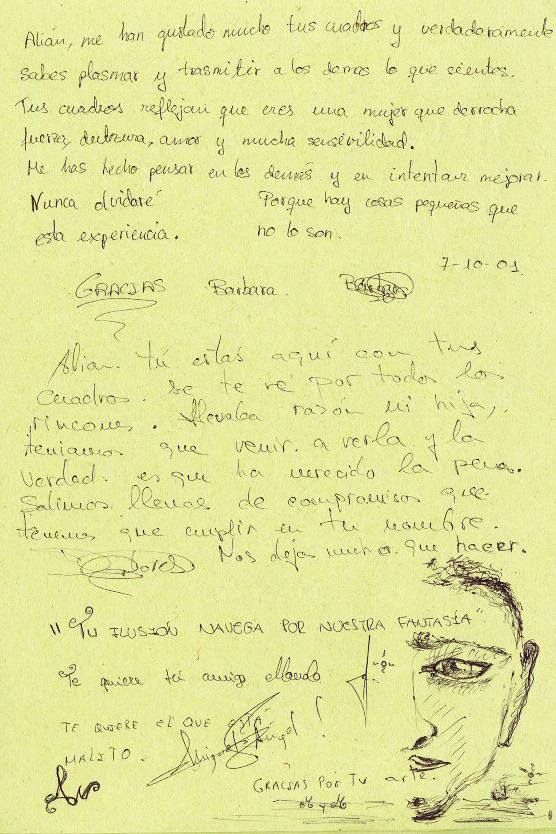 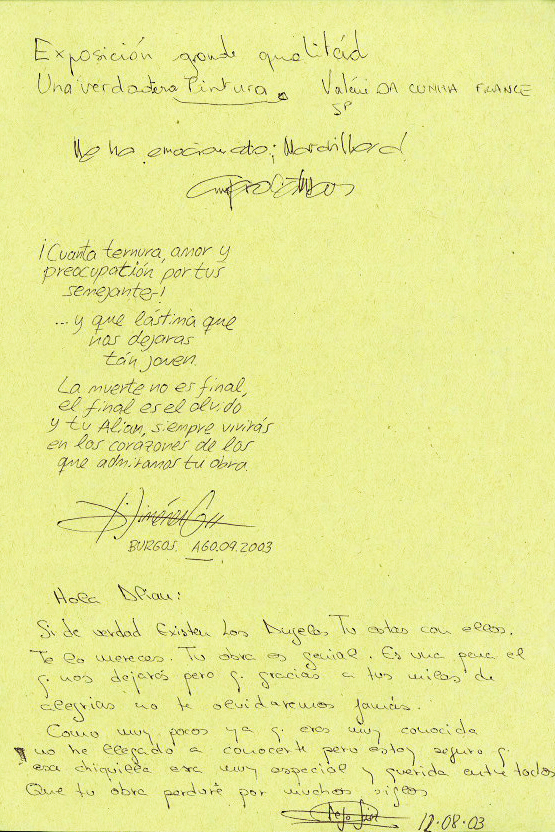 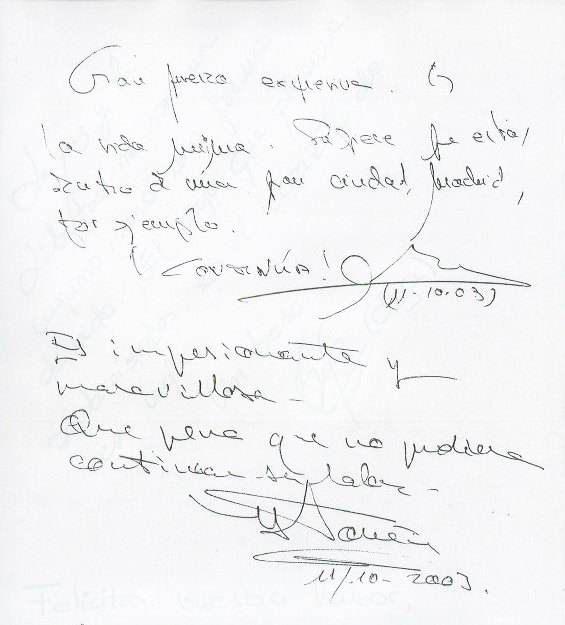 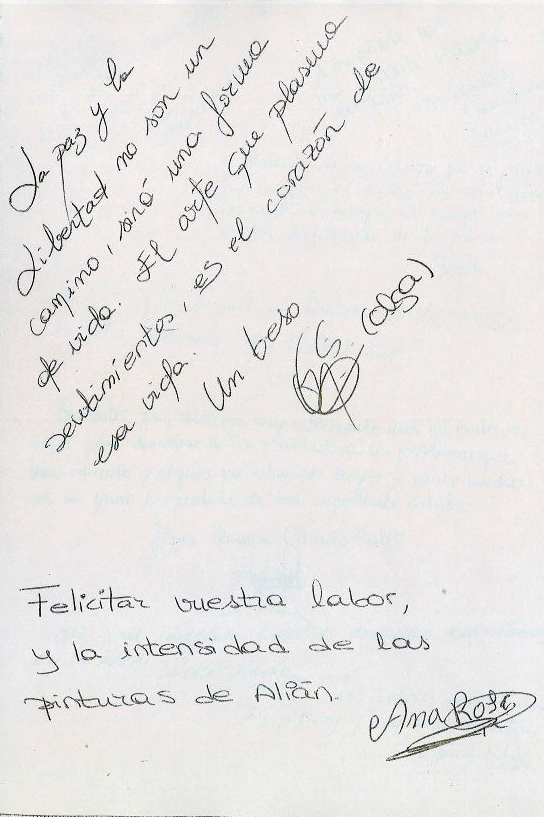